This article is about a show of my artwork, on display at the York Public Library (York, Maine) during September and October of 2019. That’s me, above, speaking at the opening reception. Most of that talk is written up below, with examples from the show.

The show includes about 40 artworks, mostly drawings and paintings, done from the late 1970s to August of 2019. It is arranged in chronological order clockwise, beginning around the corner from the circulation desk. One section on the back wall is devoted to my What’s in a Title? series, which is quite different body of work and much more conceptual than the rest of the show. There are two pieces in my Living Creatures in the Paint series from my residency at Shoals Marine Lab on Appledore this past summer.

Big, big thanks to Tannye Wold and the rest of the YPL Art Committee. The YPL has a 15-year tradition of showing work by local artists, and I am proud to be the most recent. Thank you to York Public Library.

The excitement of arranging things

One of my earliest memories is of making artwork. Well, really, of arranging things. I was walking around the backyard with some sort of a box or tray and picking up sticks and pebbles and leaves and making arrangements out of them. What I recall most is the feeling of excitement I had at discovering that these arrangements somehow had value or importance beyond their individual components. An immensely exhilarating, energetic feeling that I still get when my artwork is going well.

The beauty of pen and ink

My mom says she was worried about me as a little kid, because while I liked crayons, I only wanted to use black crayons. I don’t remember that, but I do remember, when I was about 23 years old, how excited I was to discover pen and ink drawing. The crisp beauty of an ink line was for some reason a revelation to me. The sharp contrast of black and white and the way the ink sits on the paper was an unexpectedly interesting and exciting experience.

I went to graduate school in the late ’70s at Indiana University in Bloomington, and lingered there afterward. There was a guy there named Phil Thompson who drew calendars for mid-west colleges and universities. He did great pen and ink drawings, and he is why I started drawing in that medium. Whenever I needed to know how to do the grass or the sky or window reflections I’d just look at one of his calendars and copy his technique. He had an office downtown and I would visit him and watch him work. He was very generous with advice and encouragement. I learned technique from him, but I also learned something about commercial art. He did drawings for a dozen or more calendars each year, and so had a demanding schedule. I remember a period of several months when he had to do one big pen and ink drawing every day. He went on to do a lot of etchings and sell them at art fairs. “It’s like printing money!” he said.

This is one of my earliest pen and ink drawings:

I’ve done many of Portsmouth, including:

Phillip Augusta and I started re:Ports. magazine in February of 1982. We traded our first issue’s ads for $25, a few movie passes, and a small amount of an illegal recreational drug. The Piscatasquid pen and ink drawing, a version of which is in the big print over the library’s fireplace,

began on the cover of re:Ports., as did the Kongress Street image. Both of those covers are on display in one of the library’s glass cases: 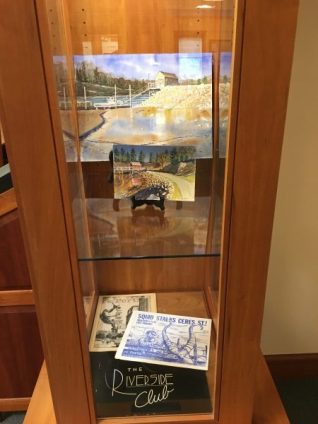 One of the greatest pleasures of doing re:Ports. magazine was doing layout for articles. In each issue we’d have one or two opportunities to put together an article with its title and illustration. The goal was to choose and arrange those items, together with a suitably expressive font for the title, in a way that would coalesce into a coherent statement for the reader. I always felt that I was arranging not just the items on the page, but the thoughts that would gel inside the reader’s head when they looked at the page.

I did color illustrations for architects and the real estate business for many years. About 20 years ago I thought I ought to try some kind of painting, and just picked the watercolor medium at random. I figured I knew how to put an illustration together, so how hard could it be? Well, it turned out to be quite hard.

I got worse for a couple years, trying to just work my way into some sort of skill. The Ile d’Orléans, Quebec painting is a good example.

I knew what I wanted to do, but I didn’t yet know how to do it with any grace. The sky is all one color, and just kind of mushed on there. The trees and most everything else are crudely rendered. But I am fond of the painting because it’s a good arrangement of shapes and I sat out there on the street and did a pretty good job of that part of it.

I began to take classes. One or two with Doris Rice, many with Jan Kilburn, and several years worth with DeWitt Hardy. For three or four years before he died I went to his house every other week and sat at his kitchen table (as did a lot of students) and showed him the work I’d done. He helped me a lot with my technique, and he always had fascinating stories to tell. Also the every-other-week deadline made me very productive. He was the kind of guy that made you want to work hard. (See “DeWitt Hardy Taught the Making of Magic,” an article I wrote for 2019’s The Art Guide about DeWitt’s teaching techniques and the many inspired students he left behind.)

Here’s one I did while working with DeWitt:

The “What’s In A Title?” series

Then I wondered, “How much art can you fit in a title?” So all six of those pieces in the back of the library are efforts to push the boundaries of what can be a title. Or to stuff more art in the title than what’s in the actual “art” in the frame. For most of them the artwork in the frame is almost irrelevant. The “art” is just there as an excuse to try out a strange kind of title.

I’ve seen this sort of thing around a few times. They all, including my own efforts, seem rather like parlor tricks or pranks. I talked to Ron Crusan, who at the time was the Director at the Ogunquit Museum, but now runs Linda Bean’s Maine Wyeth Gallery. He was politely skeptical, and said, “Well, it really depends on the artwork. You could have any old thing in the frame and stick a bell on it and call the sound the title.” So I stole his idea, but using a little gong, and you can try it out in the back.

What’s really exciting to me is that these title pieces hint at the possibility of a new type of artwork, where the title is more than simply words. What if we allowed titles to take any shape or form?  Here’s another one from the series:

This title art thing might just be a goof, but it might be a whole new territory of artistic endeavor. Imagine if 500 years ago Leonardo da Vinci had done a portrait of the Pope and then said “This painting and its subject are so important that the title must be drawn in ultramarine blue, not any other color.” (Because ultramarine blue was the most expensive pigment at the time.) Just think how the art world might be different now if that precedent had been set long ago?

Note that Powderhouse Hill, Dive Sheds on Appledore, and Red Building in Cape Breton are all more or less the same arrangement of shapes. Different colors and subject matter, but same basic composition. When I was doing those, I had to work to get the arrangement right. And when it finally came together, I felt the same sort of thrill as I did way back when.

The “Living Creatures in the Paint” series

I’ve always enjoyed painting outdoors. (See my article “The Nature of the Plein Air Artist” in 2018’s The Art Guide.) I often use water from a nearby marsh, river, puddle, or ocean, just to make the painting more of the place. We paint outdoors to better capture the place, right? So why not put a little something of the actual place in the painting?

The pond water that I use has many tiny living things in it, so I’ve already painted many paintings with tiny creatures in the paint. I just wasn’t doing it on purpose, as part of the concept of the painting. This past summer, when I was out on Appledore Island (one of the Isle of Shoals) as Artist-in-Residence at the Shoals Marine Lab, Dr. Jenn Seavey, Director of SML, mentioned that tardigrades (a.k.a. “waterbears”) could be harvested from the orange lichen on the big tower on Appledore. So I did, and put them in a couple paintings. Big thanks to Taylor Lindsay and Madeline Young for their lab help.

Then, still at SML, I was talking with parasite expert Dr. Carrie Keogh and she said she could isolate some trematode eggs to put in my paintings. Trematodes are parasitic flatworms with a life-cycle that goes from birds to snails to fish and back to birds. Then I thought, hey, if we could get the snails infected by way of the paintings, then the paintings would become one more host in the trematode life cycle. Here’s the painting as I was painting it: 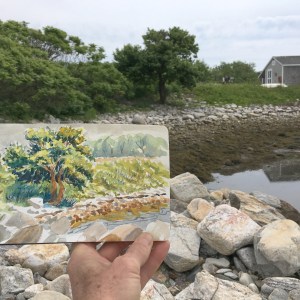 And here’s a video of that painting with trematode eggs on it and a snail crawling across them: “Appledore Apple Tree Watercolor with Trematode Eggs and Snail, by Bill Paarlberg and Carrie Keogh.”

Here’s the painting hanging at the show: 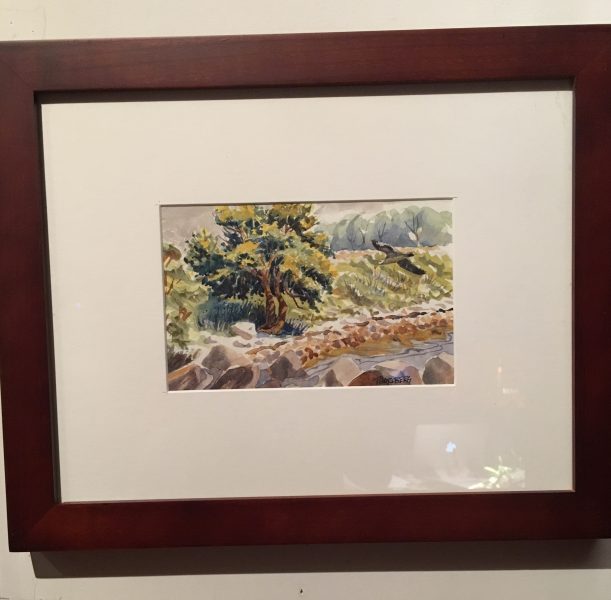 We are still waiting to see if the snails have become infected.