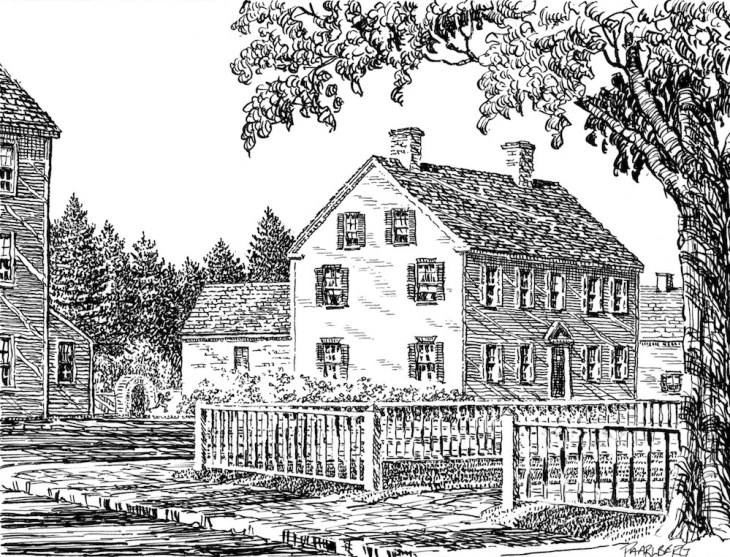 I did this drawing in ink with a crowquill pen (which can be messy, but gives interesting thick or thin lines, depending on how hard you press) for a Pontine Movement Theatre marketing piece when I was on the Board of Directors there in about 1990 or so. It shows the view across Atkinson and Court streets to a house where Thomas Bailey Aldrich lived for a few years as a kid, and which Strawbery Banke has restored as a memorial.

It was in the street in front of this building where Tommy Dale saved me from being beaten up. In the early 1980’s in Portsmouth there were several instances in which small groups of young men would assault individual guys who were walking down the street. Jan Frank, brother of Marjan who ran the Petronella, was assaulted this way, and subsequently announced that he was heading back to NYC, where it was safer. One of my old housemates at 159 Middle Street, Michael McCarthy, suffered the same fate right around the corner from the police station, which was then on Penhallow Street. After being assaulted he had run to the station, but the police apparently showed little interest in either heading out to catch the perps or comforting Michael. I was home when he arrived, in torn clothes and tears, furious at his double humiliation.

One night about 11pm in, roughly, 1982, I was walking with a female friend down Court Street toward the river. A small car full of people drove past and then pulled over behind us as we kept walking. Four or five young men got out and came up to us. I at first thought they needed our help, but, no, they began acting beligerently. I remember one of them, the largest and loudest, had his shirt off, and another one announced, “This is going to be fun, I wish I brought my numchucks.”

I do recall telling my friend to keep moving, and she did; the guys didn’t show any interest in her. They got around me in a circle, and I remember her walking away. I’ve never been in a real fight my whole life, and I just stood there pretty clueless. As they say, it looked like curtains for our hero. But just then a car drove up Court Street and stopped and out jumped Tommy Dale: “You OK, Bill?”

Tommy Dale ran the Oracle House Restaurant down at the end of Court Street, facing Prescott Park. He used to buy ads in the weekly publication I had back then, re:Ports. Arts and Entertainment Magazine. One night I filled in as dishwasher at the restaurant, but I kinda blew it; I used up all the hot water too quickly, and was not invited back.

Anyway, that night on Court Street, Tommy, who was gay and quite notorious for prowling the darker areas of town late at night, knew exactly what was going on. He walked up and the guys backed off and it was over just like that. He saved my ass, no doubt. What a guy. Tommy died of AIDS within a year or two, but don’t quote me on exactly when. Housemate Michael died of the same thing, later in the ’80s.

Now at the same time, there was a shady character named Gunnar who used to come over to the 159 Middle Street house where I lived and hang out. My housemates and I were suspicious that sometimes really late at night he’d sneak in through the sunporch windows, maybe sleep for the night, then sneak out again before anybody got up, but no one ever caught him at it. Gunnar usually wore a lot of black leather with studs on it. He had very short black hair, aggressive sideburns and enough strabismus to make holding a conversation awkward. He was a bouncer at The Riverside Club, and was rumored to always carry weapons. People said he had some kind of neo-Nazi leanings, but he never talked too much about anything. When confronted about his possible late night visits to the house, he never admitted anything, but he did claim, with modesty, that if it did happen to be the case that he was around our house late at night, well then we were all much safer for it. I never knew him to be anything but a nice guy. Rumor was that he had the occasional late night assignation with my housemate Janet. This speculation was especially gossip-worthy because Janet was Jewish.

Anyway, supposedly one night Gunnar was walking down the street and a gang of young tough guys thought they’d work him over. He stabbed one of them and scared the rest off. I never heard this from him, but it makes a nice story. The random assaults seemed to taper off after that. I don’t know what ever happen to Gunnar.